I’m pretty confident that most of you know what The Fault in Our Stars is about, it is one of those books that has been swept along in a wave of popularity and is loved by so many.
When the book first came out I just wasn’t desperate to read it, I don’t remember why.

Recently I gave in and saw the film adaptation on Netflix and I wept like a baby but not just that, the film inspired me to pick up the book, which is something I never really considered about adaptations of books, love them or hate them they get people reading!

Despite the tumor-shrinking medical miracle that has bought her a few years, Hazel has never been anything but terminal, her final chapter inscribed upon diagnosis. But when a gorgeous plot twist named Augustus Waters suddenly appears at Cancer Kid Support Group, Hazel’s story is about to be completely rewritten.

Insightful, bold, irreverent, and raw, The Fault in Our Stars is award-winning-author John Green’s most ambitious and heartbreaking work yet, brilliantly exploring the funny, thrilling, and tragic business of being alive and in love.

I can’t say enough good things about this book, firstly the writing, oh the writing, this was my first John Green book and after been drawn to his world by his delicious prose it won’t be my last. I am the kind of reader who needs to get sucked into a book pretty quickly otherwise chances are I’m going to put it down for ‘later’ and pick up something else. The Fault in Our Stars didn’t just suck me in it had me hooked from the first page, from the first line! The thing is I had seen the film I knew I was walking into tragedy but when a book’s that good I don’t even care! 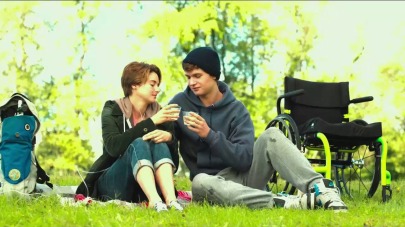 John Green creates fully fleshed out characters in Hazel and Gus it was so easy to read and mostly laugh and later cry all the while feeling privileged that I got to be part of their journey in some strange way. The Fault in Our stars is definitely a new favourite, it broke my heart and the moment I finished it I wanted to start it again.