Hi guys, today I want to have a chat about the brand new season of Shadowhunters!

For those of you who don’t know or are stopping by my blog for the first time, I am a huge fan of Cassandra Clare’s books and have been hoping so hard that the Freeform adaptation is going to be a success. This isn’t going to be a negative review but it’s not going to be a glowing one either, it’s just going to be a quick discussion about, which for me are the highs and lows of season 2 of Shadowhunters so far.

The Good the Bad and the Ugly

Let’s start with the good,  since season one the actors seem like they’re really getting a handle on their characters and coming together as a unit. My problem is not with the actors, I think they were well cast and are it seems a talented lot, my issue is how the writers have chosen to portray the characters from book to screen (but I’ll get to that).

The show is enjoyable with highs and lows and it has something that a lot of shows don’t have, a built-in fan base. If I was watching it having not read the books I would say it had a bit of a Vampire Diaries feel to it, which isn’t necessarily a bad thing it just the way Shadowhunters is shot, the ‘iffy’ dialogue and the interaction between the characters stinks of a teen drama and The Mortal Instruments book series is so much more than that. After all, children’s/young adult literature that can only be read by children is pretty poor quality literature and the same should be said of adaptations of its works should it not? The book series is a hard hitting gritty saga with some seriously mature content, done differently I think the show could have received a much wider audience and I feel the show runners and writers did the show a disservice by putting it in such a pigeon hole.

Now for the not so great, hardly anything that’s currently happening in the show actually happened in the books. I do not understand, do the writers think they can do better than the author? The author who sold millions of copies of her books, who is beloved by her fans because her world actually makes sense.

Look, the Shadow World like all the best words out there (Narnia, Middle Earth, The Wizarding Word and so on) has rules, break those rules and everything around you starts to crumble. I laughed out loud watching episode three, Clary all of a sudden having a rune that gives her the same powers as Tessa Grey? Come on writers, there is no such Rune that’s one of the reasons Tessa (A character from The Infernal Devices for all who don’t know) is so special, she is unique and all of sudden, what she isn’t unique, she isn’t special? And don’t get me started on the whole Stele swipe thing, what is that seriously?

I am not opposed to writers changing a few things when books are adapted for the big and small screen, look at A Game of Thrones and Outlander they are both fantastic examples of book to television done really, really well and changes have been made in both shows without damaging the integrity of the core material.

I also want to talk about the character of Magnus, what the hell have they done to him?!Book Magnus is funny, sexy, sassy and full of one-liners, t.v Mangus is sooo serious and a bit needy for my taste. For me there is no comparison it’s like the writers have sucked all the life out of the character. Harry Shum Jr who plays him does a good job but the lines he is given are not a lot to work with.

Overall I am giving Shadowhunters a 3/5 stars it’s not bad, but it’s not great either. I believe the show runners are changing for the second half of the season so we will see what happens going forward.

Mild Spoilers for Lady Midnight and Episode 3 of Shadowhunters ahead 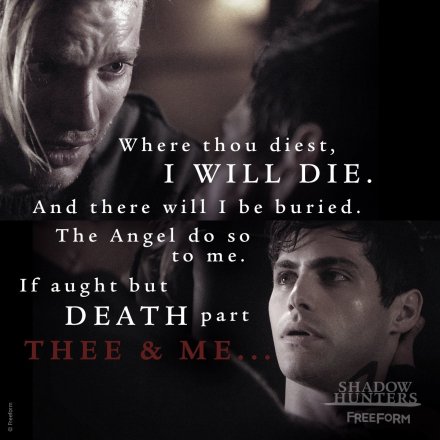 I don’t want to end this review on a negative note to I would like to mention something that I loved. In Cassandra Clare’s most recent book Lady Midnight she talks a lot about Parabatai and what they mean to each other and at one point explains how the Parabatai ceremony is almost like a wedding. When Jace saves Alec I really felt that we got a good idea of just how bonded Parabatai are and how if one of them dies a part of the other would die too, it was a beautiful scene.

That’s it for today I hope you enjoyed my Shadowhunters chat! I’ll be back with more Shadowhunters later in the season, see you next time!